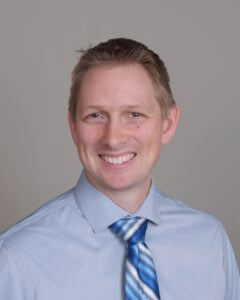 Dr. Duval received his Bachelors from Brigham Young University-Provo in Exercise Science. He then received his Doctor of Optometry degree (OD) from Southern College of Optometry in Memphis, Tennessee. Dr. Duval is the only practicing optometrist in Utah with residency training in Pediatrics, Vision Therapy, and Vision Rehabilitation. He completed his Board Certification in Vision Development and Vision Therapy (FCOVD), making him the only optometrist in Utah who is both residency trained and board certified in Vision Therapy and Pediatrics. Dr. Duval had a lazy eye from a childhood injury that was fixed through vision therapy while he was in Optometry School.

Dr. Duval obtained his Bachelors from Brigham Young University-Provo in Exercise Science. He received his Doctor of Optometry degree from Southern College of Optometry (Memphis, Tennessee).  After graduation he completed a residency in Pediatrics, Vision Therapy, and Vision Rehabilitation making him 1 of 3 optometrists in Utah to gain this type of advanced training. He also completed his Board Certification in Vision Development and Vision Therapy making him a Fellow from the College of Optometrists in Vision Development (FCOVD). He is also a member of Neuro Optometric Rehabilitation Association (NORA).

My road to Optometry was quite the journey. When I was 4 years old, I jumped off a windowsill and hit my head on coffee table along my left eyebrow. Shortly thereafter I developed a lazy eye with my left eye pointing inwards. I underwent strabismus surgery on my left eye to point them in the same direction and wore big thick bi-focals for the next few years to help. My eyes were straight, but I continued to see an eye doctor every 6 to 12 months to follow up. My eyes were 20/20 with glasses so I never really worried about my eyes.

School came fairly easy to me and I never had to really study in junior high or high school to get good grades. I just showed up to class, listened carefully, did the homework. That worked great for me because I loved reading and hated studying. In fact, the only class I didn't get an A in was AP Chemistry. Apparently, there was a textbook I was supposed to read somewhere. I hated studying because after 15-20 min I would get a headache, my eyes would go blurry, I would get sleepy, and I would see double. On top of all that, I couldn't remember what I'd read.

This strategy worked for me until BYU. I showed up to class, took notes, listened carefully, and failed my midterms. I talked to a friend about my problem and she told me that they test on things from the book that they don't cover class. I thought "if you don't have time to teach me why should I be tested on it?" However, I buckled down and spend long hours studying to get passing grades while my friends now studied less than I did to get better grades.

I took 2 years off from BYU to serve a 2 year church service mission in Thailand for The Church of Jesus Christ of Latter-day Saints. While there I saw that eyecare is that the same everywhere. I worked with one man in particular who was blind from Cataracts and on a 2-year waiting list to get them removed. Comparing to my experience with eye doctors, I started to think about working in the eyecare field. I didn't want to be the one doing surgeries but help still.

What got you into Vision Therapy?

I returned to BYU and through a lot of hard work, I made it into Optometry school going to Southern College of Optometry in Memphis, TN. The optometrist I was working for at the time I got accepted did my entrance eye exam. At one point during the exam he asked, "Do you see double." No I said. "He said are you sure? " I said, " Well, sometimes in the afternoons and evenings when my eyes get tired I go double like every one else." That's when I found out that people don't normally go blurry and double after evening after studying.

Once in Optometry School, I was treated with Optometric Vision Therapy. My motion sickness improved. I could study and remember what I read. I could read and go to the grocery store without getting a headache! With a little encouragement from a mentor, I decided to dedicate my career to becoming the doctor I wish I'd met when I was 4 years old.

See What Our Patients Have to Say About Dr. Duval and His Team

They are great with kids. I have taken my oldest child to different places. And they were not able to complete an eye exam with him. Our first time coming here, glasses were not pushed on us. And they noticed some things that they wanted to keep am eye on...
5
- Cathy w. - Google Review
Read More
As an adult who has struggled with strabismus since childhood, I felt like my condition would be my life-long insecurity. When my daughter was born with the same condition, I quickly needed to figure out how I could help her avoid the emotional challenges that I have experienced. When I...
5
- Andrea H. - Google Review
Read More
Awesome. Dr. Duval is incredibly knowledgeable and kind. After a car accident/brain injury, I could no longer read, chop vegetables, or drive (or work). Dr. D got me back to work after only a month and a half of therapy. I can't recommend them highly enough!...
5
- Laura W. - Google
Read More
Request An Appointment
Patient Forms
Email Us